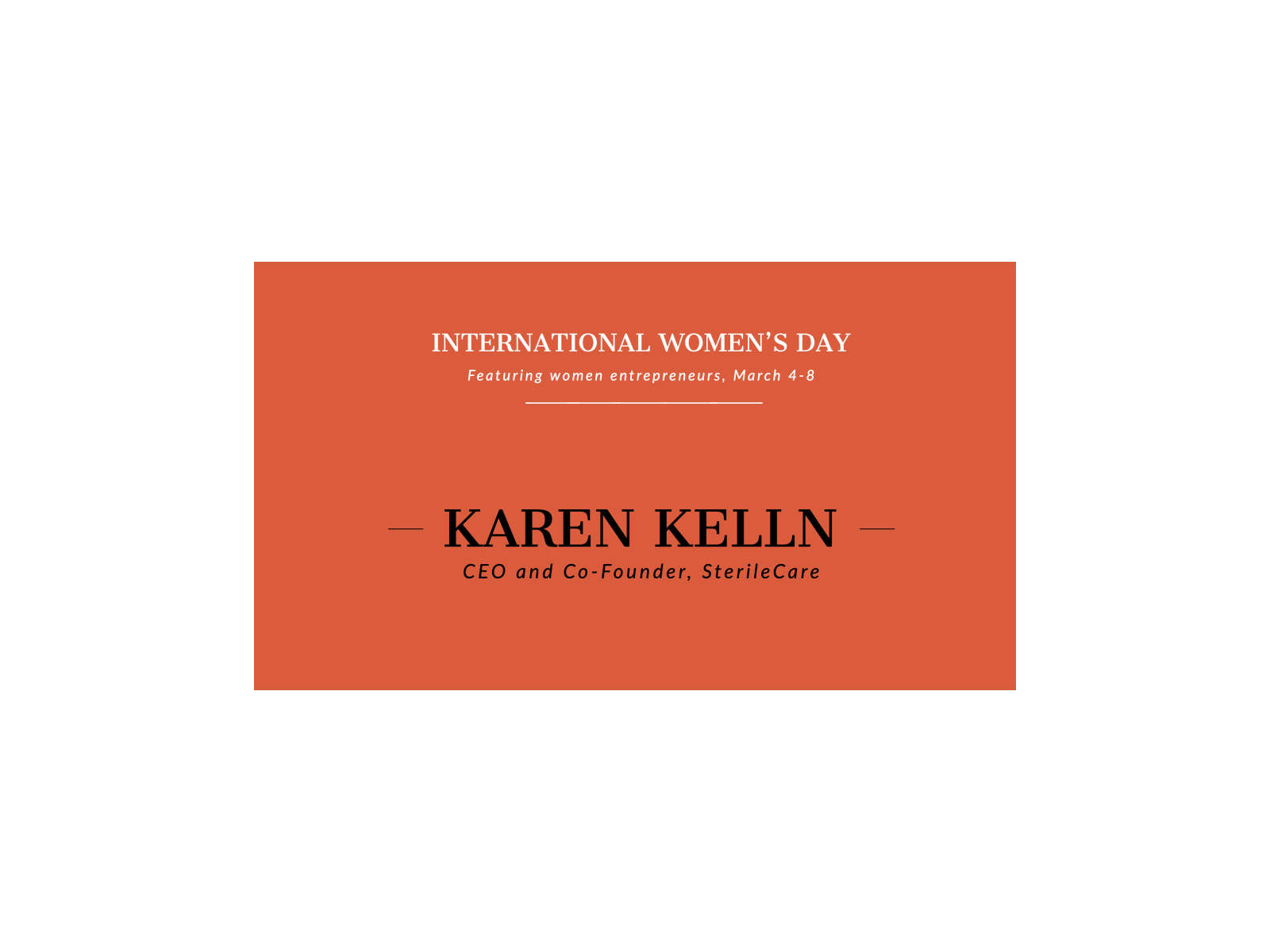 For International Women's Day 2019, we’re featuring women entrepreneurs in the ventureLAB community. Each day this week, we’ll feature a woman entrepreneur who inspires and leads her team to success, and makes an impact on her community. Read more interviews in the series here.    Today's featured women entrepreneur is Karen Kelln, CEO and Co-founder of SterileCare. SterileCare fights against the threat of serious infections with a non-antibiotic, antimicrobial solution.

What is success to you?

Growing up as a small town farm girl, success has never been about money. It’s not something I was raised with. I come from a big family and my parents always helped in the community. For me, success is about making a difference. The vision of the company when I started it was ‘work to make a difference.’ I didn’t know how it was going to come together, but I knew that focusing on children was important to me. Our product is not only making a difference for outcomes in healthcare, but we also just had news from Toronto SickKids that the kids on our products are 100% infection-free. That’s monumental for me. That’s pulling the vision together completely, not only making a difference but also having an impact on children.

What do you mean by making a difference?

Making a difference is being a game-changer. Hospital-acquired infections are a massive problem in the world, and what we do has a significant impact on that. We’re running out of antibiotics: we over-prescribe them, which is creating super bugs. The UN now thinks it’s more of an issue than global warming. If we continue on the path we’re on now, we’ll run out of antibiotics that work. It is believed that by 2050 we will hit another plague-like era, with up to 10 million people dying per year of infection because we won’t have the antibiotics to treat it.     We have a product that has an impact on that outcome. We can stop these infections from occurring so antibiotics can stay on the shelves for when we need them. We can stop this massive, monumental, health care issue that’s coming our way. That’s making a difference.

My parents have always ingrained in all of us - I come from a family of six children - that we can have whatever we want if we’re willing to work for it.

Have you seen that manifest in spaces outside of SterileCare?

It’s a mantra I’ve lived for years. I’ve had a very successful career. I started out as a nurse, then went into medical sales and in my first year was a top national sales rep. My national sales manager kind of threw me out in the forefront, and had me speak on a lot of things that I was doing. He taught me leadership is about putting yourself up front. I decided what I wanted, went after it, and got it. It’s no different than starting a company. There’s a lot of challenges - I could go on for the next hour about all the challenges we’ve had. But you believe in them, and you just keep overcoming them.

How do you get through those challenges? What pushes you forward through them?

Just believing that there’s a way. I can’t even count the number of times I thought the company was close to closing the doors. But you just believe you will find a way, and it will come. And you also believe that failing is ok. Even if you fail, there’s something to be learned in that.

Do you have advice for other small businesses and entrepreneurs?

Allowing yourself the ability to fail is huge, but I’m going to say probably the biggest thing is acknowledging that you don’t know what you don’t know. I think a lot of people make that mistake because they feel that as a leader of a company or startup they have to know everything. I’m just the opposite: I’ve always gone to people and said - I don’t understand, and asked them to explain. Being vulnerable and admitting that you don’t know everything and asking for help is massive. I was recently talking with another startup company, and they feel like they have to come out the door knowing everything instead of saying “I don’t get it.” A lot of inventors that develop a technology or product don’t understand that if you can’t commercialize the product the R&D and everything up to that point doesn’t have any value. What’s important is having the ability to commercialize - and I think a lot of people do not recognize that they don’t know what they don’t know or are afraid to ask how to do it.

Do you think people are receptive to questions?

100%. When you’re involved with people and you ask for help, someone’s going to step up. I’ve said this many times: our company would not be where it is without the help of innovation hubs like yours. Everybody at ventureLAB has helped - I put myself out there and asked for help, and so many people want to help and want to see us succeed. Vulnerability has definitely been an asset.

Is there anything else that you want to add?

I am all about equality of men and women and that we each have the ability to do great but I think we also need to recognize that how we get there may be different. We are not built the same. Women have the added value of being innate nurturers. Business has to be about people as much as it is about the numbers. We have to get back to seeing the value in the people. We need both men and women to build the next generation of businesses.     People have difficulty being seen as imperfect. It takes courage to be imperfect. I think we’re so stuck on how we present ourselves and having the ability to do everything. People need to stop and say - “I’m great at this, and not so great at that.” Acknowledging our weaknesses is as important as recognizing our strengths. That helps build a strong and efficient team.